A Former Local Star Successfully Reinvents Himself in Entrepreneurship

Goudomp – Abdoulaye Diallo gained fame as a young radio host of the community radio Poukoumel FM, “I was popular in this area”, he explains proudly. The young man and his wife were living a peaceful life, but his desire to live in opulence led him to try his luck in Europe. He hoped to earn enough money to invest in his country, Senegal.

One day in 2018, after informing his beloved, he left everything behind and took a flight to Morocco. Upon arrival, he planned to reach the Spanish enclaves of Ceuta and Melilla. His transit through Morocco, however, turned out to be much longer than expected.

In Casablanca, Abdoulaye learned to be a cook. Meanwhile, his wife, left in Goudomp, struggled to take care of their little boy, through her activities as a tailor.

The young father clung as best he could to his dream of reaching Europe. After each unsuccessful attempt to cross to Europe, he went back to work to finance the next attempt.

After four years in Morocco and five unsuccessful attempts, Abdoulaye voluntarily decided to return to Senegal. He contacted IOM office in Morocco who supported him in his return process under the EU-IOM Joint Initiative for Migrant Protection and Reintegration.

His resettlement back home has been far from smooth, “in this community when you come back from migration with nothing in your pockets, even your parents will not respect you”, he explains. Fortunately, and as always, his wife is an unfailing source of support: “I have the best wife in the world. She was the only one who understood me even though she suffered from this situation as everyone spoke negatively about me, but she never gave up.”

IOM’s reintegration assistance was a relief for Abdoulaye’s household as his wife was now providing for all the daily expenses. Together they decided to start a fabric business. The coincidence between the opening of his shop and preparations for the Tabaski celebration allowed their business to grow faster than expected. With the considerable income generated, Abdoulaye soon opened a fast-food restaurant. 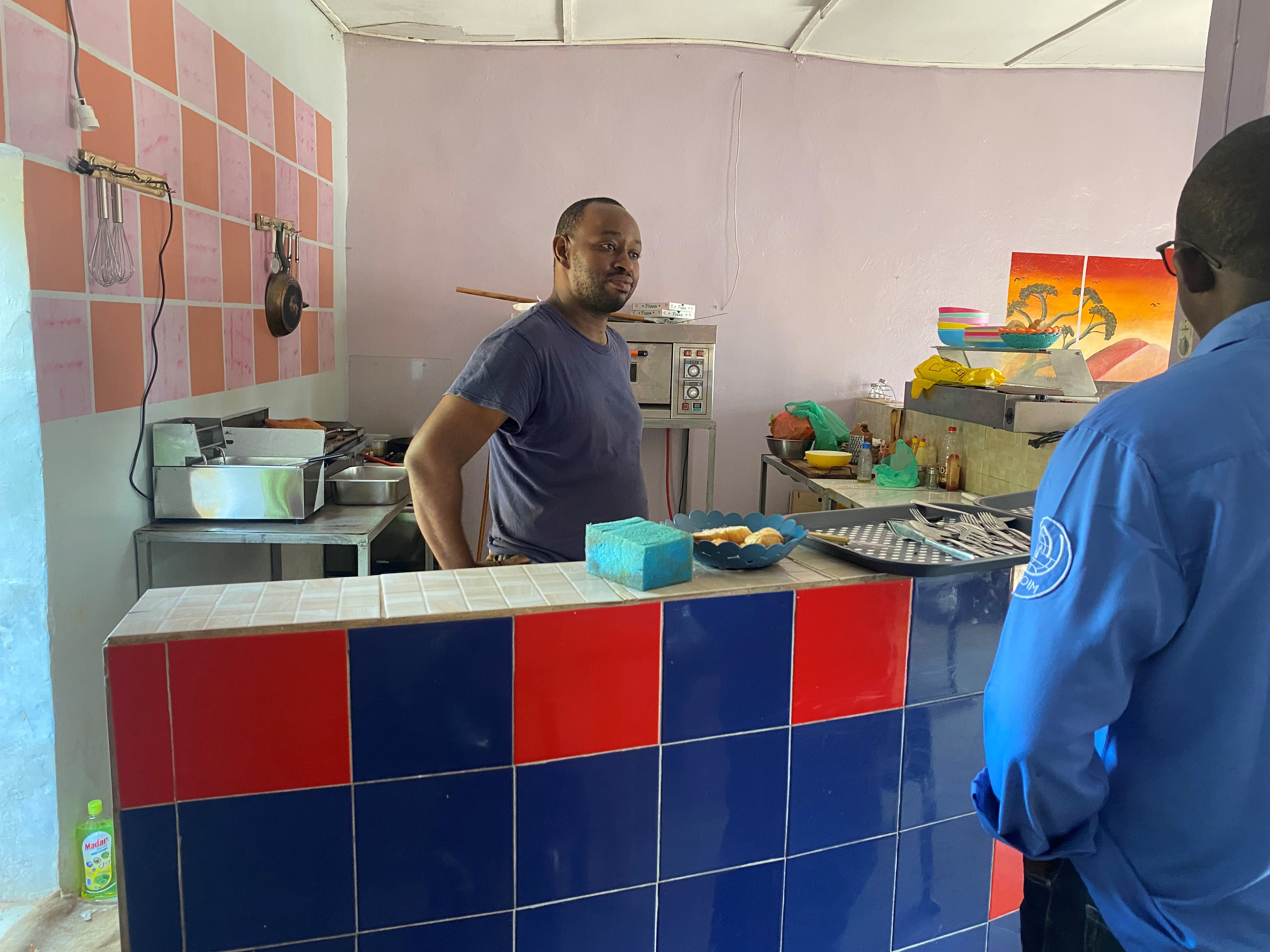 Abdoulaye enjoys cooking and sharing his passion with his customers.

The setting up of this second business was an opportunity for the family man to make the most of his experience acquired in Morocco, “I am a trained cook, all I wanted to do was open a fast-food restaurant, because that is what I know best”, he says.

Every morning, Abdoulaye opens his fabric shop. In the afternoon, he takes turns with his wife to go to the fast-food restaurant. With his three employees, they then prepare the evening service. Every day, about twenty people rush to his fast-food restaurant to enjoy his “fatayas”, sandwiches and pizzas.

Apart from his economic activities, Abdoulaye is also involved in social activities. He is a member of an association made up of Moroccans based in Belgium, whom he met during his stay in the Cherifian Kingdom. As a local representative, his role is to identify villages in need of water. The members of the association are responsible for finding funding to build wells. To date, Abdoulaye has enabled four localities to have wells through the association’s actions.

His next project should be directed towards young people who, like him, would like to leave Goudomp for a so-called Eldorado. Indeed, Abdoulaye is now planning to take part in awareness-raising and prevention activities in his department, which is known to be a departure area.

This article was written by Edouard Bernabe Diouf, reintegration assistant.