For survivors of trafficking, overcoming stigma and rejection upon return is another hurdle

“It was not easy. Starting all over again. It was not easy then, but I have overcome things like that, I’m OK. I’m getting better.”

Chinedu* sits at her sewing machine surrounded by piles of colourful fabrics and rolls of thread. She is finishing the seams on a flowery dress at the small tailoring shop in a busy commercial district of Benin City in Southern Nigeria.

In the six months she has worked here, she has built up a clientele and is in the process of working off debts accrued in 2018 when she was deceived with a promise of better work and marriage.

Chinedu was determined to leave and was blindsided by the man who posed as her boyfriend, promising her a married life with him in Germany. All she had to do was to get on a bus and follow the instructions of “connection men”. Instead of taking her “straight to Germany” as she was made to believe, Chinedu was taken to Libya where the trafficker threatened to sell her if she didn’t pay up.

“I called the so-called boyfriend, and said, ‘Look what I am going through’ but that was the end of the both of us; I never heard from him again,” Chinedu recalls.

Pressured by her traffickers to pay to avoid being sold, Chinedu reached out to her mother for help.

“She sent me NGN 90,000 (just over USD 200) at that moment, so I sent it to [the trafficker]. After receiving the money, he did not release me, he took me to Tripoli,” where Chinedu was put up with other forced sex workers.

For a year and a half, she was held against her will as a forced sex worker in Libya before she managed to escape and ended up in a detention centre after being intercepted by Libyan authorities in the Mediterranean.

Chinedu is one of the many victims of trafficking. Young women and children are particularly the target in Nigeria, where more than 8 out of 10 (83 per cent) of the 1,470 rescued trafficking victims in 2021 were female, according to data from its National Agency for the Prohibition of Trafficking in Persons (NAPTIP).

Traffickers mainly target women. Whilst it is easier for men to travel on their own, women rely more on middlemen to help them identify opportunities abroad and to arrange the travel. The recruitment of these young women destined to be forced sex workers often follows the abuse of their religious and cultural beliefs. Curses, or “juju”, are used to bind the women to their trafficker, to ensure that they don’t run away or try to expose them.

“There's a strong belief in the traditions and the culture of the land, and traffickers use these to manipulate these victims by taking oaths just before they leave the country. The victims are made to put a lot of curses on themselves,” explains Ayo Amen Ediae, a counter-trafficking officer at IOM Benin. “If they get to Europe or to any country, no matter what the challenges are, they cannot run away whenever they remember these curses or oaths they've done before leaving their country. These traffickers are aware of this, and they use it to manipulate their victims.”

It was in Libya where Chinedu met staff from the International Organization for Migration (IOM) who assist stranded migrants to return to their home countries from immigration detention centres. “A day after getting there, I met one man, he was from IOM, he gave us papers to fill out; they also brought clothes, shoes, medicine for us at the prison.”

Chinedu spent one week in the detention centre before IOM helped her return to Nigeria where she is rebuilding her life. 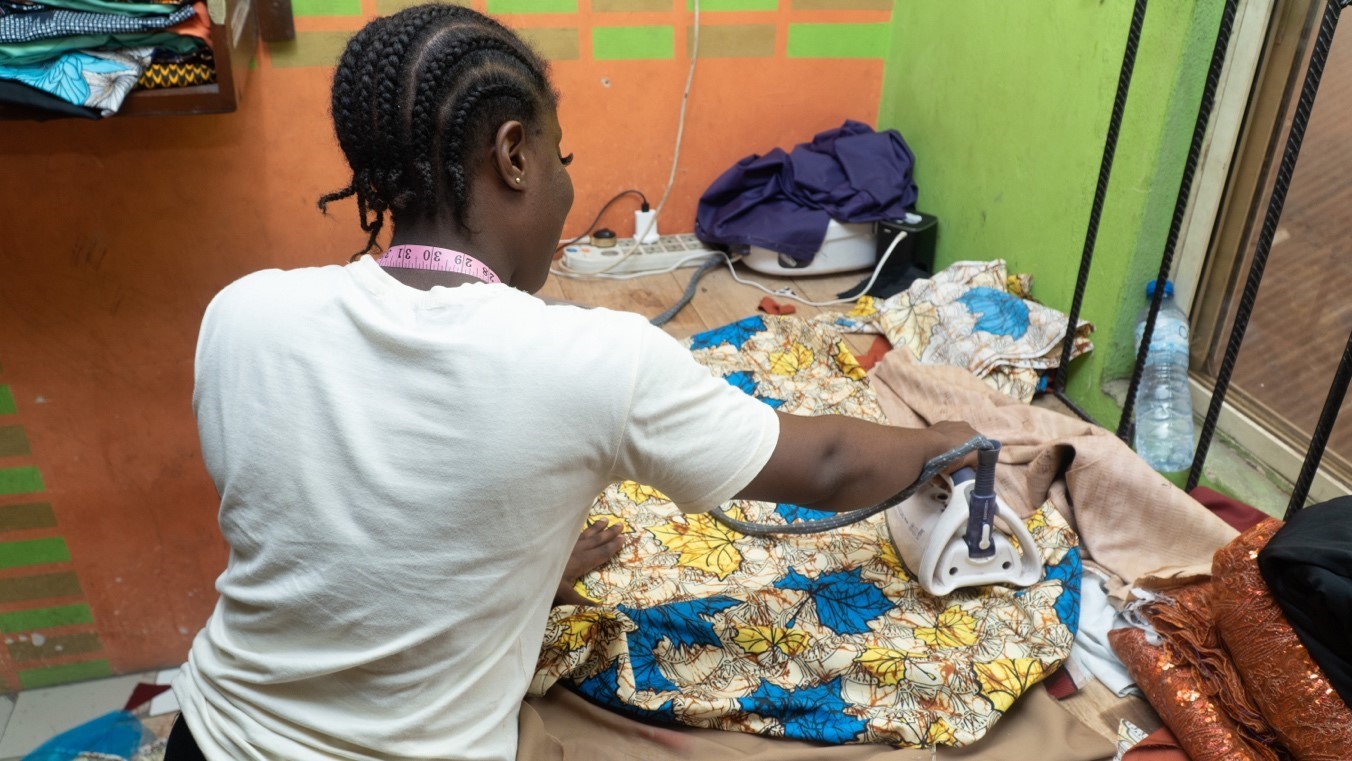 Chinedu returned to Nigeria with the help of IOM and re-established herself as a seamstress. Photo: IOM 2022/Ultrashot

A study by IOM's Knowledge Management Hub (KMH) found that emotional challenges due to negative experiences during their trafficking journey, including gender-based violence or forced prostitution, acted as a barrier towards reintegration for women.

Starting again was not easy for Chinedu.

“I didn’t go out; I was always inside. I was just on my own until I was able to get over the whole thing,” she describes her mental state when she first got back.

“I was ashamed. Coming back to start all over again, what I thought I had done before, coming to repeat, what I do now, this work, I already spent over two years before traveling to Libya, then coming back again to spend one extra year so it was like I was going back. It was not easy.”

Many women interviewed for the study were faced with exclusion from the community and from their families. Chinedu was met with anger and incomprehension when she returned to her family home. Her mother was angry for having warned her not to go. “She was against it; I was the one that persuaded her, that forced her to agree,” Chinedu says. “Now she’s wasted her whole savings, her money and the rest, and still, I could not get to Europe. My younger sister was laughing at me.”

With the help of the IOM’s assisted voluntary return and reintegration (AVRR) programme, Chinedu bought a sewing machine, rented a shop, and re-established herself as a seamstress, which allows her to provide for herself as well as for her younger sister to go to school.

* Name has been changed to protect her identity.

This story was written by Kim Winkler, IOM West and Central Africa Editor.