Omar C.’s Reintegration: “For me, going to Europe from now on will be just to sign contracts with partners ! ”

Every year, young people from the region of Tambacounda (Senegal) try to reach Europe, considered as an Eldorado. Omar C* was one of them. His beautiful smile always lights up his face, despite his sometimes-distant look, which says a lot about the journey he made. He was a victim of trafficking in Mali, Niger, and Libya, almost enrolled against his will in jihadist groups, and was thrown into prison like a dirty man. Despite his background, he decided to look on the bright side of life and become a true leader.

I decided to tell you about Omar because he is a strong-minded man. By sharing his story, I want to give a voice to those who experienced migration. They are so capable of speaking out and dissuading potential irregular migrants. Would a potential migrant want to be victim of scamming, psychological violence, physical violence, discrimination, prison, and even death? And yet, all this is the daily sufferings of every migrant.

After the death of his father, Omar’s desire to go to Europe increased every day. He didn’t care about the risks he had to face. His mother’s difficulties in supporting the family and having a decent life accentuated his search for better living conditions. During this period, Omar met a smuggler who promised him the “Eiffel Tower”. Thus, one evening in July 2016, he embarked on a perilous adventure.

His misery began in Mali, a country bordering Senegal. He helplessly witnessed the robbery of his belongings. His money is confiscated by a smuggler. Omar was then sold to a Moor from the Gao region. The young man was forced to work as a gold digger during the day. Every evening he was locked in a cage with other young victims of trafficking.

Omar befriended one of his many companions in misfortune who was originally from Gambia. The young man also managed to talk to their supervisor. The latter helped Omar and his Gambian friend to escape, to enrol them in an “army”. The two friends refused this proposal and started working in Niger. Their goal was to save enough money to reach Libya.

After some time, the two friends contacted a Nigerien smuggler and paid him all their savings. Once in Libya, they became victims of trafficking and were exploited by rich Libyans. The young man’s hopes were once again dashed. He had to work on a vegetable farm for a small amount of money. Determined to pursue his dream, Omar set aside his meagre earnings in order to reach Europe. After a year of hard work, Omar finally gained the trust of the trafficker. He took advantage of this to escape. This time, he seriously injured his ankle while climbing a wall more than 10 metres high. Despite this, he walked for two long days and managed to escape the Libyan militia several times. Omar finally found refuge with a Guinean migrant and decided to cross the Mediterranean Sea to reach Europe.

Unfortunately, Omar’s dreams were shattered again. The coast guard caught him and sent him to a prison in Griayana (Libya). In this environment, he discovered another world, one of violence and disrespect for human beings. He witnessed the murder of migrants, rapes, and survived famine. The insecurity was frightening for this young man who only knew his native village. He was confronted with the daily life of all these young people who had left in search of a better life, a daily life made up of insults, swindling, kidnapping, racism, torture, and all kinds of violence.

Another imprisoned Senegalese migrant told him about the return assistance offered by the IOM. Omar took the necessary steps to return to his community, his support circle, his comfort zone. Waiting was unbearable for this young man who had experienced, among other things, violence, abuse, exploitation, and torture. He felt that he had become like an animal, and he no longer had any value.

On the day of his return, overwhelmed by emotion, he almost fainted when he set foot on Senegalese soil. His return to his village was like a rebirth for him, a moment of pure happiness. Since then, he has never stopped thanking Heaven for having saved his life.

After regaining peace of mind, Omar decided to take advantage of the opportunities offered in his native community to build a new life: “In 2019, I received a phone call from an IOM agent to inform me about a training course in entrepreneurship and personal development, it was very interesting for me, and I had again found hope to achieve my personal and professional project.” After the training, Omar received economic support, which corresponded to 1,000 euros worth of agricultural materials and seeds. He set up his area and started market gardening. As one of the first migrants in the region to be reintegrated into this field, he made a masterstroke by making a good profit from his organic vegetables. 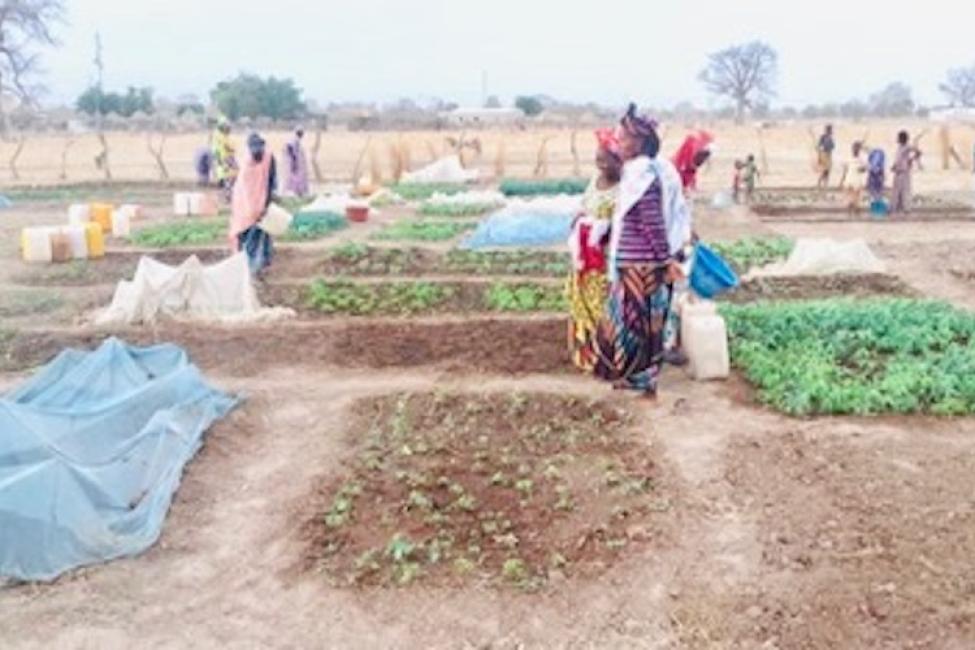 The one-hectare market garden that Omar has been cultivating since his return.

Being aware of the opportunities that his activity offers, Omar decided to involve his peers and community members in his activity. He works with three women’s and youth groups in his village. In this way, he participates in the development of his community by creating jobs. Omar has established a strong partnership with the local authorities who support him. Moreover, it is thanks to this collaboration that he has received a grant to follow a training course in pastry making in Morocco.

Omar is an entrepreneur who owes his success to his ability to take risks by diversifying his activities. He has invested in business including cosmetics products and motorbike washing. His business works very well because he has no competitors in his area. He has also built a family house with a chicken coop and raises sheep to sell them for Tabaski. All these investments have enabled him to cope with the difficulties encountered this year in market gardening. Indeed, his perimeter has been affected by climate change, and the village has gone more than three months without a drop of water falling. All this year’s crops have been lost, but the young man is not desperate.

Omar’s strength lies in his ability to keep moving forward. Today, his ambition is to train returnees to become bakers with the support of IOM. In a bid to support Omar in his projects, IOM has put him in touch with partners for additional support in capacity building, financial and material support. Thus, ANPEJ provided capacity building on the following subjects: personal development, CV writing techniques and job search techniques. Furthermore, VIS and GIZ also supported him in the fields of livestock and agriculture by providing him with inputs and small equipment to improve his activities. Omar is very ambitious and now wants to buy a tractor and expand his area. He plans to set up a large processing unit for the organic vegetables grown in his area and move into processing local fruit.

Omar has had enormous success in his reintegration. His relatives are particularly proud of this responsible young father who is very involved in family care. Omar has also become a success story in his village. He has helped to create jobs that provide young people and women with financial independence. Within his community, he often sponsors major events. However, he still has a good head on his shoulders and does not lose sight of his goals. Today, Omar is one of those young people who are absolutely convinced that it is possible to be fulfilled in our land without risking his life in the depths of the ocean. His biggest dream now is to become an entrepreneur of national and international renown: “For me, going to Europe from now on will be just to sign contracts with partners.”

* To protect the identity of those quoted, pseudonyms are used.

This article was written by Mame Lolly Faye, Field Facilitator in Senegal.